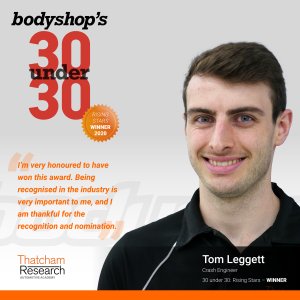 Thatcham Research has celebrated success in the ’30 under 30′ and ‘Educator of the Year’ categories at the annual Bodyshop Live awards event.

Two Thatcham Research colleagues, Courtney Goodall and Tom Leggett, were officially recognised at the online awards ceremony held on Thursday, 29 April, as they were named among the ’30 under 30: Rising stars in the sector’.

Courtney is a former apprentice who is now the Mechanical, Electrical and Trim (MET) trainer at Thatcham Research’s Automotive Academy, while Tom is a talented 28-year-old who has worked as a crash engineer at Thatcham Research for the last five years, specialising in Euro NCAP testing and assessments.

Dean Lander, Head of Repair Sector Services, said: “It’s great to see Courtney and Tom included on this list. Both are exceptionally gifted young men and are forging successful careers for themselves in an industry where they can really make a difference to vehicle safety and repair. We’re proud to count them both as colleagues.”

Bodyshop Live recognises the top performers in the automotive collision repair industry, with Thatcham Research also featuring on the list of finalists for ‘Educator of the Year’ – an award that honours training providers who are excelling at generating the skills base vital to safeguard the future of the industry.

“To be shortlisted for the ‘Educator of the Year’ award is an honour,” Dean Lander said. “We’re incredibly proud of the work we do to train the new talent coming into our industry and it’s satisfying to see our efforts recognised by those at the heart of our sector.”

Training the technicians of the future

Thatcham Research operates its world-class Automotive Academy at its headquarters on Colthorp Way, Thatcham. This facility gives upcoming vehicle repair technicians the skills they need to understand and fix the automated, connected and electrification technology that is becoming increasingly common on vehicles.

Results to be proud of

More than 1500 apprentices have graduated from the Automotive Academy since it was opened in 2004 and it has held Ofsted’s ‘good’ rating for the last five years.

It also boasts a 92% student achievement rate and could continue delivering its training during lockdown by successfully switching to an online learning platform – ensuring its 155 apprentices were able to continue their education without disruption.