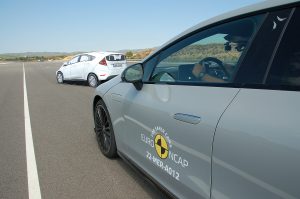 The latest Euro NCAP safety results have been released today, including seven vehicles that went through rigorous impact protection and crash avoidance testing and a separate Assisted Driving Grading for the Mercedes-EQ EQE.

The Mercedes-EQ EQE’s Assisted Driving or ‘L2’ system has been rated ‘very good’, achieving the best overall score in testing to date.

The Assisted Driving Gradings champion balanced systems and combine assessments around technical performance, how carmaker marketing and the operation of the system itself keep the driver engaged, and the quality of the car’s safety back-up mechanisms in the event of an emergency.

The EQE’s resulting overall Assistance Competence score of 85% is the highest achieved by any carmaker taking part in the Assisted Driving Gradings to date. The EQE is also the first to achieve a perfect Safety Back-Up result of 100%.

Matthew Avery, chief research strategy officer, Thatcham Research comments: “Mercedes-EQ is a brand that appears to be getting Assisted Driving right. Driver expectations are managed successfully thanks to appropriate naming conventions and marketing that clearly positions system function as ‘assisted’.

“The driver is encouraged to understand that it’s a team effort involving cooperative driving between motorist and machine, as opposed to becoming convinced that they can check-out completely.”

It also boasts a new safety protocol function when in Assisted Driving mode, where in the event of an unresponsive driver, the EQE automatically moves to the slowest lane and performs a controlled stop.

Avery comments: “Previously, vehicles operating in Assisted Driving mode would simply stop in lane should the driver fail to respond. Mercedes-EQ is the first however to design a system that moves to a slower lane in this scenario, an action that must be taken for the safety of all motorway drivers.”

As its Safety Back-Up score suggests, the EQE also rated highly in Euro NCAP’s separate ‘passive’ impact performance and ‘active’ crash-avoidance testing. Here, the EQE was awarded a five-star Euro NCAP rating for safety, with one of the year’s highest Adult Occupant Protection scores (95%) and further impressive totals across the board. 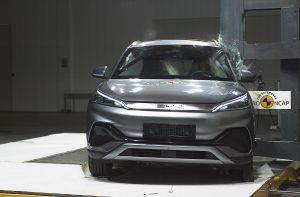 Other vehicles to undertake Euro NCAP’s exacting safety testing include the Atto 3, from Chinese manufacturer BYD. Just as the WEY Coffee and Ora Funky Cat did in October’s results, the Atto 3 received a five-star rating.

Avery adds: “Chinese manufacturers are achieving great safety results. It is fantastic to see these carmakers not only performing to the five-star standard, but also posting scores that equal – or even better – those achieved by more established European brands.”

“It’s a logical progression for BYD to move into the personal vehicle segment, as it already understands the nuances of the UK market,” Avery continues. “It is well positioned for success, as BYD controls its whole supply chain, giving it far greater protection from the parts delay issues currently effecting the wider market.”

Other vehicles given five-star Euro NCAP ratings in this round of testing include the: BMW 2 Series Active Tourer, BMW X1, SEAT Ibiza and VW Golf.

The Citroën C5 X and Mobilize Limo were given four-star ratings.