The world’s only Commercial Van Safety Rating programme, administered by vehicle safety experts at Euro NCAP and Thatcham Research, has awarded Fiat’s Ducato model a Platinum rating – marking the first time a manufacturer has ever received the highest accolade available.

The independent rating programme was first introduced in 2021 amid growing concerns for the lack of safety-critical equipment that is available on new vans, compared with new cars. Scores are based on the availability of emergency braking, speed limiter, lane support, and seatbelt reminder systems, as well as the performance of active safety technology.

Per mile travelled, vans and LCVs are involved in more deaths of other road users than any other vehicle type. And, with UK van sales continuing to rise sharply safety experts want van manufacturers to do more to ensure their vehicles offer collision-avoidance technology that has been proven to protect other road users.

FIAT is the manufacturer that has raised its game the most since the first batch of test results were released in 2021. Its Ducato previously only just secured a Bronze rating, with a score of 28%. But fast-forward to the latest results and the re-worked Ducato’s score has increased to 88% – ensuring its status as the first van to ever receive a Platinum rating.

Its 60% score increase was attributed to the all-round strong performance of its AEB and speed assistance systems, as well as its improved lane support capability, with the addition of Lane Keep Assist (LKA) which helps steer the van back into its lane.

Matthew Avery, Thatcham Research’s Chief Research Strategy Officer, said: “FIAT have completely raised the bar this year and we welcome the brand’s response to our calls for improved safety on vans. To jump 60% from one assessment to the next is very impressive and we congratulate the brand for achieving the world’s first Platinum rating.

“It is also good news that this Platinum rating has been achieved by a shared van platform within the Stellantis Group. The Ducato’s performance has the potential to benefit a huge chunk of the market because the Vauxhall Movano, Peugeot Boxer and Citroën Relay share the same production platform. We hope the Ducato’s features will be made available on these vans too.” 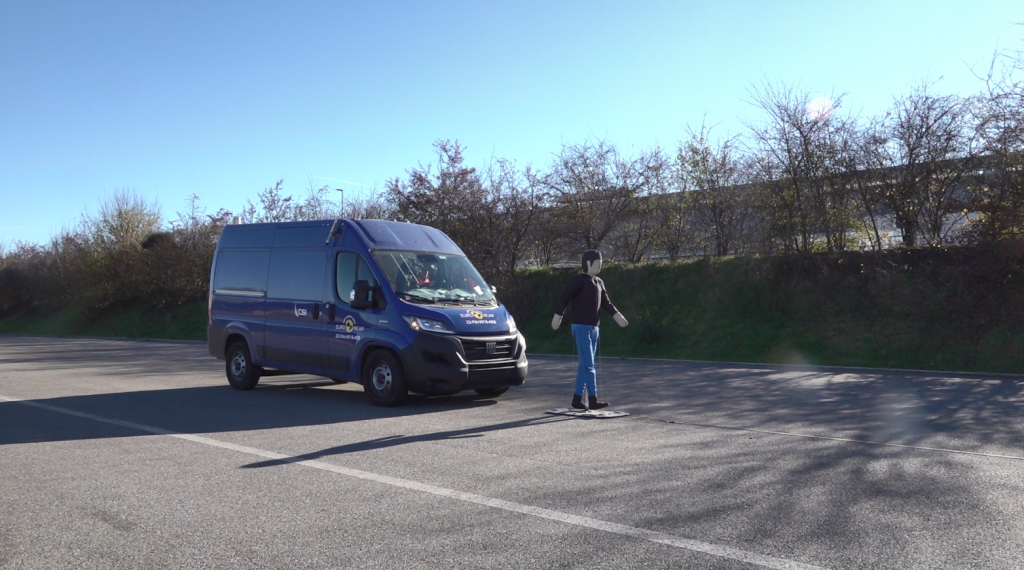 Results showed that other manufacturers have also reacted positively to calls for improved van safety. Eight other vans increased their score in 2022, with five achieving a higher rating. Ford’s Transit Custom, currently Britain’s best-selling van, moved from the Silver rating band into Gold.

The Renault Trafic and Vauxhall Movano also recorded significant score improvements. The Trafic, which was Not Recommended in 2021, scored an additional 34% this time around, thanks mainly to the addition of AEB and lane support technology. This earned it a Silver rating. The Movano meanwhile, increased its score from 7% to 33%, elevating it from Not Recommended to Bronze. 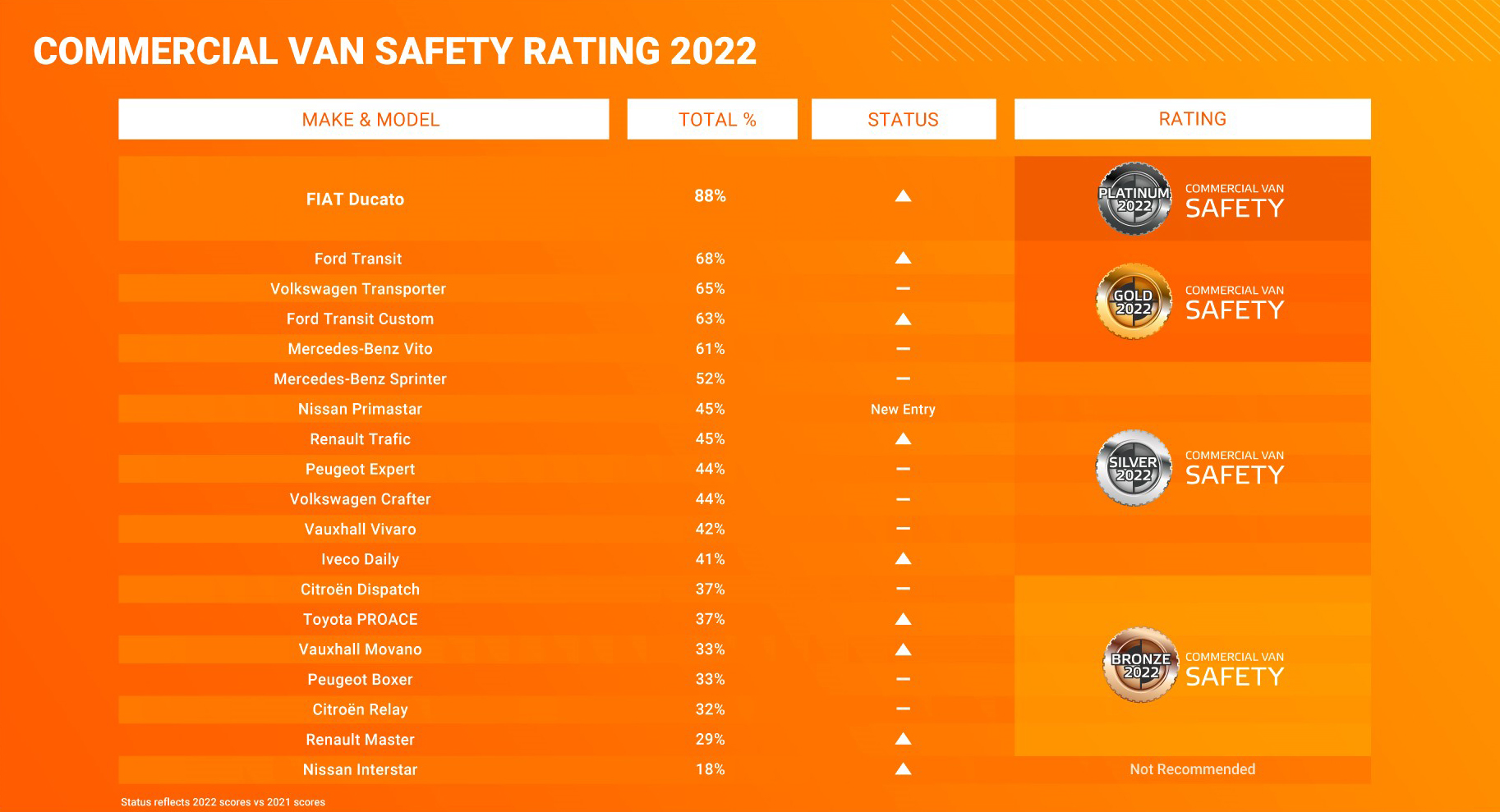 The worst Commercial Vans Safety Rating performer in 2022 was the Nissan Interstar (formerly the brand’s NV400 model). With very little safety equipment – including AEB – available as an option, the Interstar scored 18% and was therefore the only van among the 19 tested to be handed a Not Recommended rating.

The Interstar shares the same Stellantis Group Large Van platform as the Bronze-rated Renault Master, so Matthew Avery was disappointed to see Nissan has not followed Renault’s lead in offering a safety-critical AEB system.

“This is a great example where a manufacturer, in this case Nissan, has decided to dismiss the value of a critical safety feature and put marketing before engineering,” he explained. “That’s disappointing and doesn’t reflect the good safety performance of the brand’s passenger cars.

“The 2022 results clearly show fleet operators and business owners which vans they should be choosing. Specifying ADAS technology has a value. It can help prevent an expensive vehicle being off the road for repairs, drivers being off sick, and any reputational damage that can be caused to a company after an accident. ADAS has the power to keep businesses moving and delivering for their customers.”

This year’s Commercial Van Safety Rating results show that some manufacturers – particularly FIAT and Ford – are listening to the calls for improved van safety. The fact the Ducato earned a Platinum rating and there was only one Not Recommended rating in 2022, compared to five in 2021, shows progress has been made in the last 12 months. But Thatcham Research has cautioned that more still needs to be done to close the safety system deficit between new vans and new cars.

“These results are a step in the right direction and we applaud the brands that have moved forward. But the fact remains it’s difficult to buy a new car without Advanced Driver Assistance Systems (ADAS) technology, whereas it’s still difficult to buy a van with ADAS,” Avery said. “These are two vehicle types that share the same road space, so they should have parity.

“With next year’s Commercial Van Safety Rating assessing standard fit safety systems rather than available technology, van manufacturers still have a lot of work to do. “Together with Euro NCAP, we’re raising the van safety bar much higher in 2023.

“This will support our determination to reduce the frequency of van collisions, create greater safety system parity between vans and cars, and ultimately, protect other road users from serious injury or death.”

Click the link to learn more about the ratings and the safety gap between cars and vans: