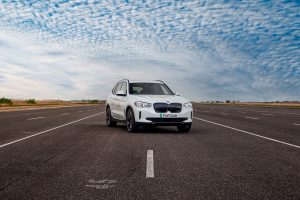 Thatcham Research and Euro NCAP are encouraged by the results of their latest Assisted Driving Gradings, which show all seven of the mainstream vehicle manufacturers whose cars were tested, are committed to fitting robust Assisted Driving technology at every price point.

The BMW ix3 stood out from the crowd, thanks in part to a new sensor set resulting in a high-performing, balanced Assisted Driving experience. It’s appropriately named ‘Driving Assistant Professional’ system and the measures BMW has put in place to educate and engage drivers ensured it was the only vehicle tested to achieve a ‘very good’ rating.

Seven new cars were assessed during the latest tests. Five of them were pure Electric Vehicles (EVs), reflecting the increasing popularity of this type of vehicle within the new car market.

Each car was evaluated and rated for the level of assistance, level of driver engagement and effectiveness of the safety back-up offered by their Assisted Driving systems. The best systems strike a good balance between the amount of assistance provided and how much they do to ensure drivers are engaged and aware of their responsibilities behind the wheel.

Matthew Avery, Thatcham Research’s Chief Research Strategy Officer, said: “Assisted Driving technology can be a great comfort feature, especially when supporting drivers on long motorway journeys. But it must strike the right balance between offering a meaningful level of assistance and ensuring that motorists don’t sit back and let the system do the driving. We’ve seen the dangerous outcomes on roads around the world when drivers become convinced that their role is secondary.”

Last year’s Assisted Driving Grading results prompted Thatcham Research to raise concerns that some carmakers were overselling the supposed self-driving capability of their technology. The naming, marketing and performance of Tesla’s ‘Autopilot’ system was highlighted as a concern.

Reassuringly, the capability of all the cars in this year’s assessments is being described correctly and consumers are not being led to believe they are driving a car equipped with Automated functionality.

Avery said: “All seven cars we’ve just tested are clearly marketed as having ‘driver assistance’ functions, not ‘automated’. These systems are engineered to involve and support the driver in a very cooperative manner. They’re certainly not trying to offer automation, where the driving task can be relinquished to the vehicle, and we strongly believe that’s the right thing to do.”

Click the link to visit our Assisted Driving Grading webpages, which features video and explainers on how the grading works.